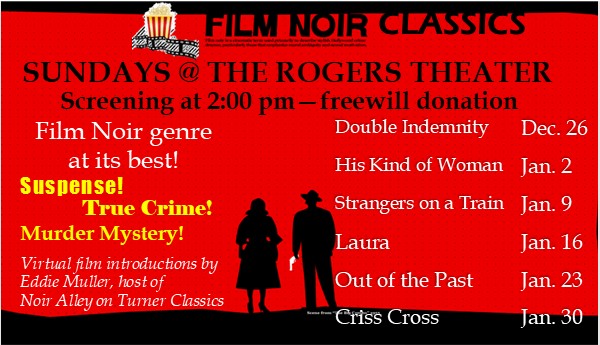 Film Noir is a style of filmmaking, "dark film" characterized by using stark lighting effects; shot in black and white. The plots are mostly American crime dramas, suspenseful storylines, and detective films. The films were cast from a time when the American public was coming out of the Great Depression and WWII. There was a collective sense of uncertainty and film noir embodied these fears. There is further film discussions to whether film noir can be classified as a "genre" or subgenre or if it is a style of filming. The films selected for the series are considered some of the exemplary films of the film noir style and popularized by the public. For six consecutive Sundays starting on December 26th through January 30th, a feature film from the film noir classics will be screened at the Rogers Theater at 2:00pm. There is a freewill donation to help support efforts to renovate the historic Rogers Theater. Prior to each screening, a special virtual introduction to the film will be provided by Eddie Muller, host of Noir Alley on Turner Classics giving the audience some behind the scenes insight about the film. So this winter, come inside to the Rogers Theater and see classic film noir films on the big screen and cozy up with suspense, murder mystery, and true crime....with a bag of popcorn.